Facts about the Golden Gate Bridge 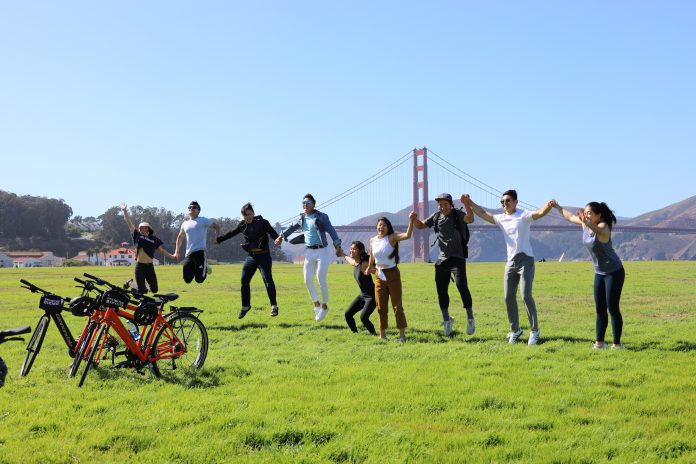 1993 was the year in which the construction finally began: After a long time of setbacks and fundraising, Strauss and his team finally broke ground on the bridge on January 5, 1933. It was a big event with a parade to Crissy Field. At least 100,000 people attended the celebration.

And we also found out that the Golden Gate Bridge and the Brooklyn Bridge in New York have something in common. Its cables were made by the same company that built the Brooklyn Bridge. Strauss needed cables that would be strong enough to support the structure of the bridge and bend 27 feet laterally in the Gate’s high winds. So he turned to the experts: Roebling’s Sons Co. – they made the cables for the Brooklyn Bridge 52 years earlier and knew exactly what to do.

Safety was super important! Strauss spent a ton of money on safety. On average one person was killed per million dollars spent on a big project. But Strauss wanted to beat those numbers and wanted all workers to wear glare-free goggles, use hand and face cream to protect the skin from the high winds and go on special diets that should fend off dizziness. They also installed a net under the bridge that cost $130,000. It helped to speed constructions and gave the workers a feeling of safety. The net was an awesome idea, it saved 19 men who otherwise would have plummeted into to water below.

The colors of the bridge should be original carbon gray, aluminum or black and the U.S. Navy wanted black with yellow stripes. But at the end, Irving Morrow (Consulting architect and responsible for the bridge’s Art Deco look) didn’t want any of those colors. Of course, the bridge was instead painted international orange, because it fits in better with the surroundings and it offers excellent visibility in San Francisco’s legendary fog.

After 4 years of contractions, the opening was big. The people celebrate it for a whole week. The Golden Gate Bridge Fiesta lasted from May 27 to June 2. Opening day was “Pedestrian Day” and 15,000 people an hour went through the turnstiles, each paying 25 cents to cross. Vendors set up along the roadway sold an estimated 50,000 Hot Dogs. At noon on May 28, FDR pressed a telegraph key in the White House that announced the bridge’s opening to the entire world, and at 3 p.m. a fleet of 42 Navy ships sailed under the bridge; the day was capped off by a fireworks display at 10 p.m.

And now the question is how much does such a bridge weigh? When the bridge opened in 1937, the weight of the bridge along with its anchorages and approaches was 894, 500 tons. Re-decking in 1986 reduced the total weight to 887,000 tons.

Now you have all the background information and you’re ready to bike the Golden Gate Bridge with Unlimited Biking.

See ya in SanFran!