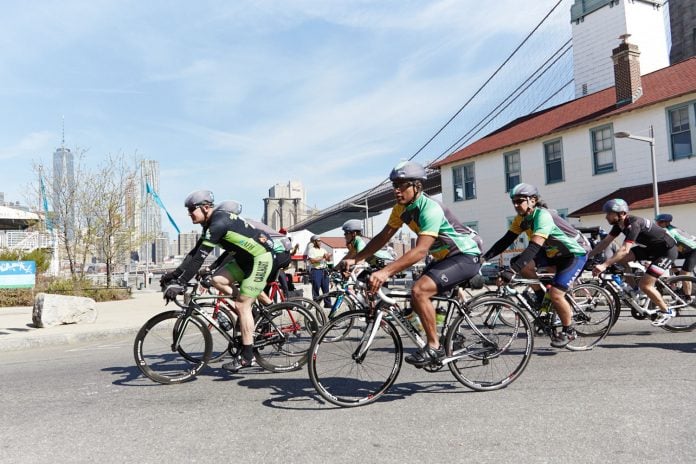 The “velocipede”, now known as the “bicycle”, made its debut in New York in 1819. After the Civil War, a new type of velocipede became more popular, pedestrians became very interested in this new means of transport. This new velocipede has liberated women, inspired music and athletes. Occasional cyclists have started cycling in the parks, they have also started using bicycles as a means of daily transport. In Brooklyn, motorcyclists were seduced by New York’s first bicycle path, built in 1894 to attract visitors to Coney Island. A year later, in 1895, the “wheel men” had to register with the Parks Department and obtain a badge to wear on their chest in order to ride a bicycle. In 1896, the Brooklyn Parks Department built bike racks and shelters in Prospect Park to accommodate cyclists and attract more visitors.

The parks also discovered the practical use of bicycles in Prospect Park and Central Park, both of which conducted bicycle patrols in 1900. And for a core group of dedicated athletes, the parks have been the place to meet and race bicycles: Long Island Wheelmen sponsored bicycle races In the 1920s at Victory Field in Queens’ Forest Park, the Century Road Club of America organized races on the running track at McCarren Park in Brooklyn, the Empire City Wheelmen organized a series of races on Sunday mornings on Ocean Parkway and the Amateur L’Amérique used the Dreamland parking lot in Coney Island.

The bicycle boom of the late 19th century had a significant impact on the New York region. Brooklyn and other cities have built new bike paths. There were bicycle races in the streets and in the parks. The most important races took place in deprived areas, including Madison Square Garden, which was designed for cycling races. In the mid-1920s, people had more money and started buying cars, bicycles were gradually falling into ignorance. The bridges built at the time had no bicycle paths or sidewalks to dominate the streets of New York.

In the 1930s, motivated by the dual mission of public safety and public health, park officials renewed their commitment to build cycling facilities in the parks in the era of park expansion and new recreational opportunities. In 1936, the Department of Parks opened the dead disc west of the Central Park shopping centre to cyclists and drew attention to the need to create more cycling areas to meet the growing demand for this type of recreation. Cycling was becoming more and more popular and was beginning to become a trend. Everyone wanted their own bike.

In the 1940s, the bicycle occupied an established position alongside other recreational activities. As of that date, there were 29 bike paths in all parks in the New York area. In the 1950s, the Department of Parks had successfully built more than 50 mile of bicycle paths in urban parks and, due to the growing popularity of cycling, officials felt obliged to restrict bicycle access to designated trails.

As cycling became more popular again in the 1960s and environmental issues became increasingly important, parks began to experiment with the possibility of closing parts of their largest parks to cars and organizing cycling events. Between 70 and 80, cities were building more and more bicycle paths. The parks also hosted bicycle rides, guided tours, tourists and visitors. After many years of varied use, the effort to create continuous bike paths has been a complex process requiring coordination between many government agencies with varying and sometimes overlapping jurisdictions. For decades, the Parks Department has been looking for a way to create a new cycling area to allow cyclists to commute safely every day and also to facilitate traffic in the city. The ideal of bicycle travel as a means of connecting not only the people and places of the city, but also makes New York City the most important place for cycling and sightseeing.

Towards the end of the century, rebuilt bicycle lanes on major bridges were created, redeveloped or improved and New York City’s Department of Parks and Recreation, in partnership with other agencies, created the Manhattan Waterfront Greenway and other bicycle paths. Today, buses crossing the Bronx-Whitestone Bridge cross bicycle racks at the front of each vehicle.

The Ministry of Parks and Recreation has also added a program for suppliers to provide bicycle rental services “hop on, hop off” in several parks in the city. The bicycle rental network is facilitated by concessions in Central Park, Riverside Park South, West Harlem Piers Park and The Battery. In 2017, there were more than 450,000 bicycle rides per day in New York City, compared to 180,000 per day in 2006. These days, more and more people are using bicycles to get to work, to discover or to make short trips. People are starting to cycle again because the cities are too crowded with cars and trains.