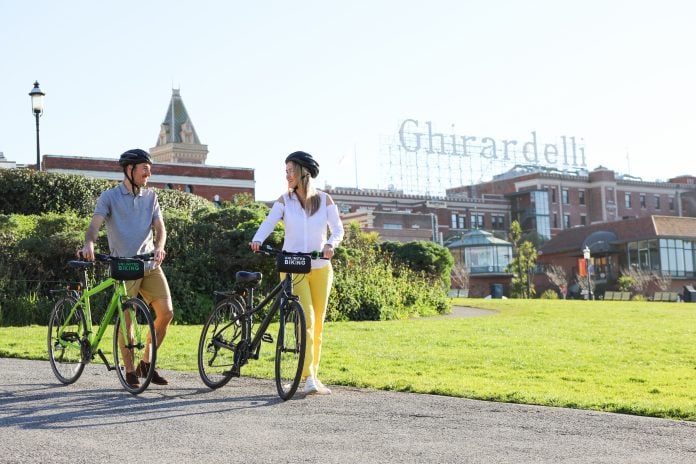 If you want to discover the park in is totality and explore the different important places, cycling is the best choice!

2. Tilden Regional Park (5-10 mile / 2 to 3 hours): is a 2078 acres regional park located in East Bay, in the San Francisco Bay area near Berkeley. The park has several bike paths and is perfect for moderate speed rides!

6. Union Square to Sausalito (10 mile / 2 to 3 hours): From the very modern city centre of San Francisco to the former fishing village of Sausalito, this dynamic cycling tour will take you across the majestic Golden Gate Bridge. You will also discover during this tour several places well known of the inhabitants such as Chinatown, Coit Tower, Fisherman’s Wharf, Maritime National Historical Park, Alcatraz Island, the Palace of fine arts theatre, Crissy Field and its impressive view on the Golden Gate Bridge, Torpedo Wharf, Presidio, the vistas points which is on both sides of the bridge as well as Sausalito its view and the floating houses. This tour is one of the longest but also one of the most interesting to do!

8. San Francisco Zoo to Lands End Park Trail (5 mile / 1 to 2 hours): To pedal while breathing the iodized air of the Pacific Ocean, without ever losing sight of the waves from the beginning to the end of the ride. Start from the San Francisco Zoo and follow the beach on the bike path. The road is flat until Balbao Street. Then you have 1 mile to go to Lands End Park with, below, the ruins of the Sutro Baths, the largest aquatic complex of the late 19th century. You will then arrive at the USS San Francisco Memorial, then Eastern Coastal Trail Overlook, and finally Lands End!

9. Alamo Square to Ocean Beach (5 mile / 1 to 2 hours): To the ocean! This bike ride past the famous Painted Ladies of San Francisco and across the Golden Gate will guide you straight to the Pacific Ocean and the fine sand of Ocean Beach!

10. Union Square to Twin Peaks (5 mile / 1 to 2 hours): The bike ride starts in the center of San Francisco to the Twin Peaks Hills, it is a short but intense ride as it takes you to the 918 feet high peak. This is one of the bike tours, which should be definitely not missed because the Twin Peaks offers a 360-degree view of all the city’s neighborhoods from above. Day or night, it is an impressive landscape that will enchant you!