A Cyclists Field Guide to Biking the Bridges 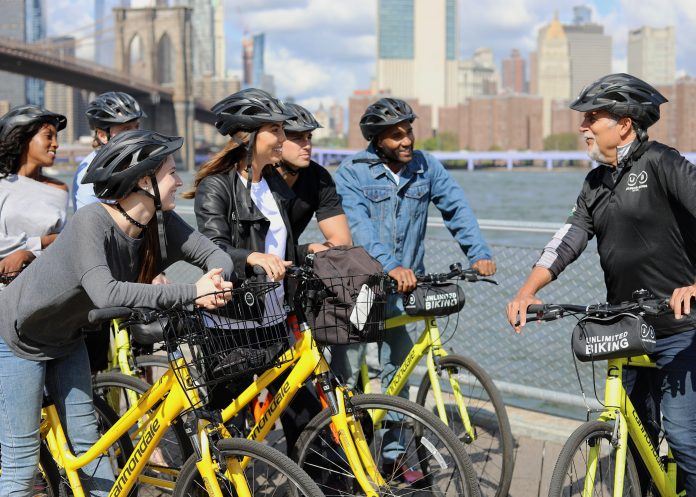 The Brooklyn and Manhattan bridges, though they share the same purpose of getting you over the East River, are as different as the two boroughs they’re named after. Being the first major suspension bridge in the city, the Brooklyn was built in an era with no heavy machinery and power tools, and after fourteen years of effort it shows, looking almost like an ancient Roman structure. The Manhattan, built around fifty years after, couldn’t look more different, with steel girders fastened together by rivets and sharp, angular shapes in its design.

Biking across these bridges is just as different an experience as their appearance. Let’s start with the Manhattan Bridge. Say you’re staying in a hotel in Manhattan but someone recommended you check out Williamsburg or DUMBO, and you want to get there with as little fuss as possible. In this case, you’ll want to take the Manhattan Bridge.

Starting out at the entrance on Canal Street, the first thing you’ll notice is how much room there is. The bridge has its own two-directional lane dedicated to biking. This where you’ll find native New Yorkers riding on, most likely people who live in Brooklyn and are either commuting to work or going back home. While there are some great views of the Brooklyn Naval Yard to take in, you’ll want to look both ways before stopping for some photos. Think of this bridge as a highway: it’s speedy and convenient to get to where you need to go, and fun as long as you’re aware that there are people behind you who think you’re going slow, no matter how fast you are!

Also, while the Manhattan Bridge is a major historical landmark in its own right, let’s just say it may not be as well-tended as its next-door neighbor the Brooklyn Bridge. You’ll find a lot of graffiti all around the bridge (some of it even in the subway tunnel right next to you!), and a lot of it quite impressive to see in its own right.

Now let’s head over to the Brooklyn Bridge. If the Manhattan is a fast and breezy highway, then biking across the Brooklyn is a quaint country road. With a lot of other people. If you plan on biking across an icon of New York City and a National Historic Landmark since 1964, let’s charitably say that you should expect to go at a leisurely pace. The fun to be had on this bridge is taking in the spectacular views of the Downtown Manhattan and Brooklyn skylines, and admiring the bridge itself, and the amount of manpower and effort that went into the construction of this Herculean structure—so it’s a good thing you’ll have plenty of time to do it.

The two towers holding up the suspension bridge provide walkways spacious enough to get off and take some snapshots of the skylines. If you bike to the middle of the bridge, you’ll find another nice place to stop, with some benches, some space to move around (since most of the people who start to walk across don’t usually follow through and turn around halfway.)

You can see both magnificent landmarks (and their bike lanes, with all the quirks that come with them) and much more on our Brooklyn Bridge Bike Tour, which leaves daily at 9AM and 4PM. We’ll see you there!