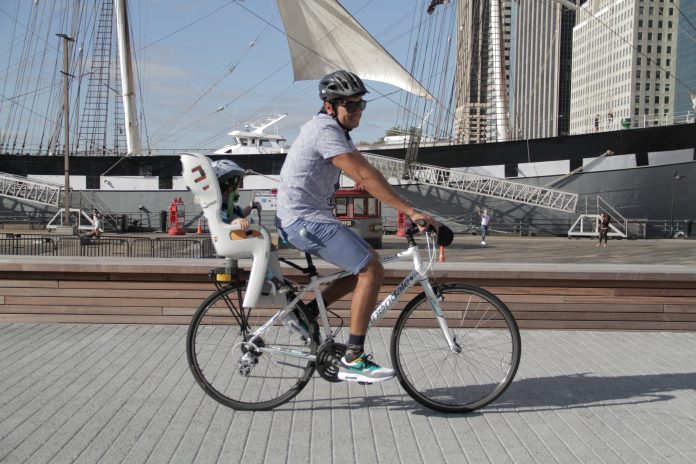 NEW YORK — In the last decade, the decrepit piers and industrial zones along five miles of the Hudson River on Manhattan’s West Side have been utterly transformed. Hudson River Park is now a destination that gets 17 million visits annually, with a bike path, green spaces, playgrounds and recreation ranging from mini-golf and skateboarding to kayaking and even stand-up paddleboarding.

Melissa Lopez rented a bike a few weeks ago from Unlimited Biking at Pier 84, near 44th Street and 12th Avenue, and was amazed at what she saw as she rode downtown through the park. [Unlimited Biking has a location now closest to the Hudson River at 346 West 57th street, between 8th and 9th avenue].

“It was gorgeous, like a little nature haven, beautiful flowers, trees, and only when you looked over to your left (at the buildings), did you realize you were in between a concrete jungle and this beautiful river,” said Lopez, 29, who came in from her home in suburban Westchester for the day. “Everyone was doing something active – sunbathing, rollerblading, bike riding. There was one pier with a volleyball court with sand. I kept telling my boyfriend, `Are we really in New York City?’”

Lopez’s reaction is proof of just how much things have changed along the river. For much of New York City’s history, “the waterfront was where the industrial areas were,” said Madelyn Wils, president and CEO of the Hudson River Park Trust. “Then in the 1960s, the port business went away and the waterfront areas became so derelict they were an embarrassment. If you saw pictures of what this looked like even 10 years ago, you’d say, `How could anyone let that happen?’”

Looking at the ribbon of spotless walkways, plantings and creative play areas along the river today between Battery Park City in Lower Manhattan and 59th Street, it’s hard to imagine what Wils is describing. But when she and other New Yorkers began working to create the park in the late 1990s, one of her goals as a mother of three living in Lower Manhattan was simply to make more places where kids could play. In 1998, the city and state provided land for the park, and construction began in 2001. Last year’s opening of Pier 25 in Tribeca, now one of the park’s most popular areas with mini-golf and volleyball, was a crowning achievement.

There are still small sections along the water awaiting redevelopment – a pound for towed cars, a facility for Sanitation Department trucks – but the walkways and bike path are uninterrupted. (Wils says the park has “more bikes on the bike paths than anywhere else in the country – 6 million a year.”) Between playgrounds, lawns, sports facilities, boating options and other amenities, the park’s attractions number in the dozens.

“There are so many different boating opportunities in the park now,” said Nancy Brous, metropolitan region director for the Hudson River Watertrail. Many of the programs are run by volunteers to educate New Yorkers who may never have been in a kayak or out on the river before, Brous said, but the walk-up kayaking programs also get “a lot of out-of-town visitors. This is something that’s really going to be driving the tourist trade as time goes on and more people seek it out.”

Another aspect of the recreational boating programs is teaching the public about the river. It’s a tidal estuary, so the currents are strong, and the water can be murky as the tidal flow stirs up silt. “It’s not crystal clear and you can’t see that deep into it, but it’s not pollution,” Brous said. “People are very surprised when they learn about the water quality. Just by the birds you can tell it’s clean – they’re out there and they’re catching fish.”

Hudson River Park is also home to historic vessels that can be toured; public art like the AIDS memorial at 11th Street; yoga and other fitness programs; concerts, walks and talks, including a Sunday morning nature tour where participants learn about the park’s 85 species of birds. Little wonder the park has started turning up in travel guides to New York City as an option for visitors looking for something to do besides shopping, theater and museums.

The park is also near several of New York’s biggest attractions: the Intrepid Sea, Air & Space Museum, at 46th Street, where the NASA space shuttle Enterprise will go on view July 19, and the High Line, the stunning urban park built atop an old elevated freight rail line between Gansevoort Street and 30th Street, slightly east of the river along 10th and 11th avenues.

Another busy spot within the park is Chelsea Piers, a sports and recreation center with a bowling alley, indoor skating rink, golf driving range and other things to do between 17th and 23rd streets. The Frying Pan is a bustling bar and restaurant on a salvaged boat docked at Pier 66, 26th Street.

Lopez later raved about her day of biking in the park on her blog, called FunFitChic, as the “best day ever,” and she’s now recommending the experience to out-of-towners. “We have a cousin here from Puerto Rico, and I said, `Let’s get on a bike and go there.’ It’s definitely the way to go.”

To rent bikes near the hudson river, please click here