Rough Riders in the City (Yes, THE New York City) 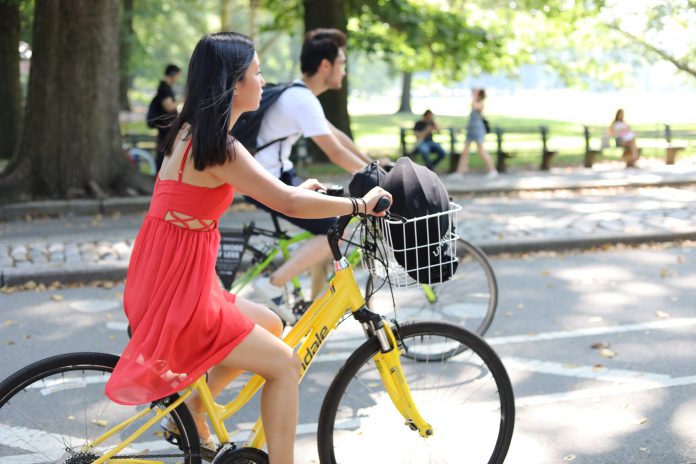 Biker-friendly: Markers at Cunningham Park point the way to easier or to more difficult routes.

But that’s all on pavement. Riding through the woods, negotiating twists and turns and roots and rocks, is an entirely different experience. (Although avoiding taxicab doors and delivery trucks is good practice.) Mountain biking improves upper body control and balance as much as leg strength and aerobic capacity.

Make it up that twisty, rock-strewn hill, and triumph is in the air.

“You accomplish this thing that has stymied you the last few times,” said Jamie Bogner, president of the New York City Mountain Biking Association. “You’ve done it.”

Until a few years ago, mountain bikers would have to head for the hills, or at least the suburbs, to find a legal trail. Today, though, there are three — one in Manhattan, one in Queens and one in Staten Island — that put backwoods riding within the swipe of aMetroCard.

Each trail has its own environment, terrain and challenges. All three were de factodumping grounds before volunteers did some heavy lifting, both in persuading the city to allow the mountain biking and in actually removing discarded tires, refrigerators and stoves.

There’s enough to do in the parks that house the trails to make each worthy of a day trip.

For a beginner, the first order of business is getting hold of a mountain bike. Mine was refitted years ago with slick tires for faster city riding, so I decided to rent one. Many bike stores and rental companies supply hybrids, but not bikes suitable for trails. I found mine at Central Park Bike Rentals, where I paid $35 for the full day, lock and helmet included. With three businesses splitting the retail space, this has to be one of the few places where you can order a crepe, surf the Web and shop for bike gloves while your rental gets a safety check.

As for technique, Mr. Bogner suggests keeping your body loose, particularly the arms and legs, which he called “your best shock absorbers,” and getting comfortable with changing gears and using both brakes.

And now, off to the woods.

Getting to the trailhead at Cunningham Park is probably the hardest part of riding there. It’s a 20-minute bike trip from the last stop on the F train, or about 30 minutes from the 7 to the trailhead at 210th Street and 67th Avenue. But bring directions, which you can get from the mountain biking association’s Web site, nycmtb.com, because the park is large.

The trails are well defined and perfect for a first-time mountain biker. Markers point the way to the easiest or more difficult routes, and even the hard parts have easier options. The paths are one-way, so there’s no oncoming traffic, and while there are enough trails to bike for hours, you probably won’t get lost.

The riders I encountered there on a recent blazing Saturday were friendly, supportive and as diverse as Queens itself. Greg Martinez of Rego Park, Queens, invited me to follow him on a loop. Mr. Martinez, who works in tech support, said he first biked here about a year ago and now can’t stay away. “It was all downhill from there,” he said, adding that he does his bit to keep the trail clean by carrying out a piece of litter each time he rides.

We sped around banked turns, hopped over obstacles and rolled through small but exhilarating dips and inclines. The experience reminded me of a roller-coaster ride that makes you shout like a child, “Again!”

Explore more of Cunningham Park and you’re likely to find yourself biking on a shady, paved path called the Vanderbilt Motor Parkway, one of America’s original automobile roads (fascinating historical marker) that you can follow east to Alley Pond Park. West of Cunningham Park, within about a half-hour’s bike ride, are the Queens Botanical Garden and Queens Museum of Art.

Reminiscent of the Ewoks’ forest moon in “Return of the Jedi,” Wolfe’s Pond Park is the lushest of the three city spots. It is also the only one with freshwater ponds and a beach.

Unless you live on Staten Island, getting there can take awhile, but if a bike-boat-rail adventure to thick woodlands piques your interest, this is the trip.

The Staten Island Ferry has a bicycle area on the lower level, and once a search dog sniffs its approval, you park your bike and enjoy the 25-minute ride. Next, walk your bike to the Staten Island Railway. Exit about 35 minutes later at Prince’s Bay. Cross over the tracks and make an immediate left on Herbert Street. There’s the trail.

Wolfe’s Pond is good for beginners, with orange markings guiding the way, but there is more trial and error here, and a few more downed trees to circumnavigate, than at Cunningham Park. The thickness of the woods and humidity on the day I went made it feel like a rain forest, a sensation that grew when the skies opened about 20 minutes later.

On a nicer day there’s plenty more to do: go to the beach; visit Anderson’s Annex, a remote bar and restaurant near the bay; or take a 3.5-mile ride east on Hylan Boulevard to the southernmost point in New York State, Conference House Park, where the British and the Americans failed to hash things out in 1776. Back at the ferry landing, meanwhile, you can catch a Staten Island Yankees game.

If Cunningham and Wolfe’s Pond are a little bit country, then Highbridge Park is thrashing rock ’n’ roll. Forget mellow, rolling and lush; think instead of cliffs, rocks and twisting, leg-burning climbs. In mountain bike speak, the trail is technical.

It’s also easy to reach. When the uptown No. 1 train pulls into the Dyckman Street stop, you can see the green sign for a trail entrance off to the right, just across the street on Fort George Hill.

As Mr. Bogner of the mountain biking association gave me a tour of the trail he helped to create, he reminded me to walk the bike through difficult stretches, advice worth heeding as we spun through areas with names like Hellfighter, Hessian Hill and Rough Ryder.

If you want to get the lay of the land before trying a trail, take in the summer sprint racing series, a casual event for mountain bikers that begins on Friday night. The park is also home to a city pool and a water tower that overlooks High Bridge, the city’s oldest, expected to reopen in 2013 after a renovation.

We stopped to check out the dirt jump park, a feature that accompanies the trails in all three boroughs and is popular with young BMX riders.

The one downer is the litter on the trails, evidence that visitors other than mountain bikers have been having a good time here. Mr. Bogner said the park, a 45-block sliver overlooking the Harlem River, had come a long way from its low point, when miles of paved paths were buried beneath layers of garbage. But he said it was still a work inprogress.

“Who would think that in the middle of the most densely populated island in North America,” he said, “that you could get an interesting, challenging wilderness experience out on trails?”

Details about parks are at nycgovparks.org; search for the park name. Besides riding the trails yourself, you can try: