A Cyclist’s Guide to the Jamaica Bay Greenway 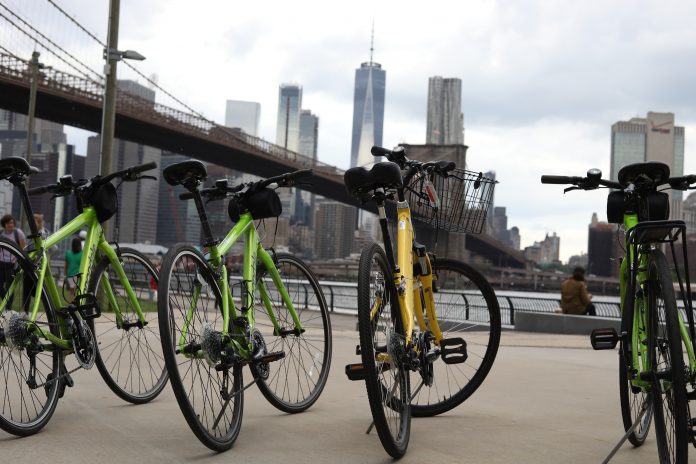 Out of all of NYC’s “greenways” the Jamaica Bay Greenway is probably the only one that actually lives up to its name. This 19-mile cyclist and pedestrian loop in southern Brooklyn and Queens runs along a wildlife refuge that’s the largest of its kind in the city. The area is teeming with all sorts of fauna and flora, as well as a few historical gems. There’s a lot to see and do on one of the longest bike rides in the city, so here are a few of our recommendations that will help you make the most of your ride.

Birdlovers rejoice! The Jamaica Bay Wildlife Refuge is paradise for both birds and birdwatchers. Over 70 species of bird regularly nest within the refuge’s 9,000 acres, but over 200 species have been sighted here. Spend some time among the calm of the refuge’s wetlands, salt marshes, and woods and you’ll see warblers, egrets, all kinds of waterfowl, and much more. With all the wildlife around you, you’ll forget that you’re in the city.

Floyd Bennett Field has had a lot of past lives. In 1928 it was a municipal airport, but during World War II the federal government decided it would be of better use as a naval air station. Today Floyd Bennett Field doesn’t see as much action, but it is dedicated to preserving the history of its glory days. Stop by the Field’s gorgeous art deco terminal, which has now become a museum of the airport’s history. Then check our Hangar B, where you can get up close to WWII -era planes. If you’re visiting on a Tuesday in the summer, don’t miss the 2.3-mile bike race around the field.

Venture through the abandoned ruins of Fort Tilden.

Unlike Floyd Bennett Field, this military base hasn’t been given a new 21st-century purpose. Ever since the base was decommissioned in 1972, the area is slowly being reclaimed by nature. If you’re a fan of venturing into abandoned buildings, Fort Tilden is the spot for you. Just beware of the poison ivy.

Jacob Riis Park, like a lot of places around the Jamaica Bay Greenway, has a military backstory. This park was previously a naval air station but now it’s one of New York’s favorite public beaches. The relatively uncrowded beach and the art deco bathhouse are some of the main draws, but locals also take advantage of Jacob Riis’ opportunities for surfing and golfing, too. The 88-acre park is divided into 14 bays, but FYI, Bay 1 is considered the “adult” part of the beach, since it is frequented by nudists.

Interested in biking the Jamaica Bay Greenway and seeing these sites?

Stop by one of our Unlimited Biking locations to pick up the perfect bike for your journey.